Today clients and professionals all slept in. The balance of us began to organize all things necessary for a proper two night, three day expedition back to the Chobe River conservancy area. After an early lunch of camp made pizza at eleven thirty the two land cruisers, one boat in tow, and fully packed were again off on safari.

Camp life slowed back to its normal glacial pace in the absence of paying guests, and the Big Bwana in charge of all things (lol, though quietly and out of earshot, please). Dinner was a quiet four person affair, Koen a seventy one year wise camp watcher, Margaret, Rita, and myself. As we sat around the fire beginning at eight the camp alarm systems were off the hook. For those of you NOT familiar with African alarm systems, they are of a four legged variety, invariably a Jack Russell, or variant thereof. In our case two J. Russell’s, Saddle and Jessica, and one african tribal dog, named Lucky.

Lucky became my new best friend. He is like a million of his kind across the continent, that lives day to day. Just like most people and things African do. His name is appropriate because he was taken in as a camp dog. This means food, on a more or less reliable schedule, people that treat you as royalty as opposed to a “thing”, and as safe an environment as can be expected in “wild” Africa. Saddle and Jessica were on the small side of the Jack Russell species and yet as protective as any of their breed.

Back to the evening fire. The dogs were constantly tearing off, and barking their alarm barks every ten minutes until we all retreated to our chalets. Lucky slept just outside our door on the concrete porch. The source of our camp marauders became apparent soon enough. Their propensity to break branches and stuff large amounts of forage in their yawning maws could be heard regularly throughout the night, as well as their splashing in the nearby lagoon. The morning provided proof positive of our multi tonned visitors in the sighting of six Jumbos cruising the perimeter of camp heading towards the communal settlement less than two kilometers away. Good Riddance! No damage to property or persons and another gift of a day was upon us.

Another day of relative ease and quiet. Weather, spectacular across the board, except for the persistent bush fires raging on three sides. The lack of wind allowed the fires to spread to the tree canopy and light off the northwest horizon. Today I would try to organize a hunt for some sticks to fabricate a new three legged set. It seems in a carless moment the expensive three legged set was backed over as they rested upon the rear bumper. In today’s Africa tubed tires are not as prevalent as they were in the past. So to find an old tube to wrap and bind the sticks was also added to the hunt.

Building activity continued on a final steel framed, canvas sided guest chalet. The mystery of a power tool that would not work as it did yesterday, provided a humorous lesson in dead battery(s) and the need to recharge them DAILY. Mystery solved, one hour wasted, and the project was back on track. Hand held staplers, rivet guns, and largely anything mechanical were always good for a new “oft repeated” learning opportunity. I guess the same type of teaching would be required for most all of todays high school students and graduates. If it does not pertain to a mobile device for shared connectivity then they are equally helpless babes in the woods. 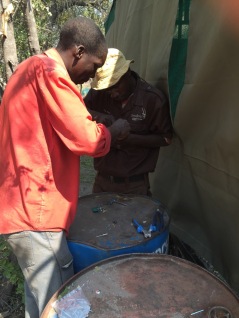 The intricacies of a pop rivet gun

The magic hour came and went without further incident. A stillness most intense enveloped everything. No sounds penetrated this night. The fire burned loudly and few words were spoken around tonights fire, except for customary pleasantries. I silenced the genset at nine and absolute quiet ruled. No night sounds of birds, bush noise, dogs, nothing. The contrast to last evening was notable. We all turned in and around ten I was awakened by the whoop – whoop low call of hyena to the north. It was soon joined by another voice repeating the same gruff call. The serenade increased in both volume and frequency as they circled the camp on three sides until well after two in the morning. It was African music at its finest.