It was my great pleasure to have five days roaming at will on the famed Erindi Game Reserve in Namibia last week. The owner, Paul Joubert, repeatedly admonishing me that I had not seen the “big one” yet. He was correct and prophetic. I never did see the “big one”, but man did I see plenty of really good ones, 60 pounds per side and more, with one being around 120 pounds per side. A truly great jumbo, of the kind that are rarer than unicorns in todays world.

Of note these big boys carry massive ivory. 18” circumference at the lip at a minimum. Several are over 20” for reference. Their ivory is also very brittle. 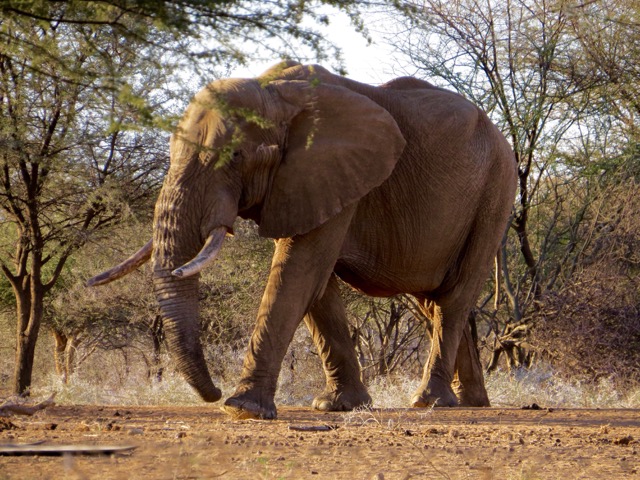 I thought you guys might enjoy the photos… also I couldn’t help posting the young jumbo kicking the croc out of the mud hole!

The biggest jumbo pictured is around 48 -50 years of age and stands 3.8 meters high at the shoulder, as of 2013. He weighed eight and a half tons!! These jumbo were captured and relocated from Khaudum Park on the border with Botswana in 2013. The full story will be put up on Ngruma.com later, describing the entire experience. Enjoy!!